Amos Wako is a Kenyan politician who was born on 31st July 1946 in Bukhayo, Busia District. He is a former Attorney General and the Senator for Busia county. Mr. Amos Wako left the State Law Office on 26 August 2011 as per the new constitution which demanded him to leave office one year after its promulgation.

He was succeeded by Prof Githu Muigai. He joined the Orange Democratic Movement, on whose ticket he contested for the Busia senate seat in the 4 March General Election.

Wako stands at an average height and has moderate weight. He appears to be quite tall in stature if his photos, relative to his surroundings, are anything to go by. However, details regarding his actual height and other body measurements are currently not publicly available. We are keeping tabs and will update this information once it is out.

Wako was born and raised by his parents in Kenya. Our efforts to find out more about his family came to no avail as no such information is publicly available. He was raised alongside his seven siblings; Elizabeth Okeniyi, Lester Wako, Florence Bah, Adam Wako, Charles Wako, Nora Mutua, and Lavera Levi.

Amos Wako is married to his lovely wife Flora Ngaira. The couple is blessed with two children. The family resides in Nairobi Kenya.

The statement identified Wako’s wife Flora Ngaira and son Julius as also designated as per the American law.

The Department of State reiterated that the U.S government will continue to help Kenya fight corruption.

“Economic prosperity for all Kenyans is only possible by defeating the scourge of corruption, which also requires a functional, fair, and transparent criminal justice system. The United States will continue to stand with all Kenyans as they strive to curb and punish corruption in Kenya,” the statement adds.

This is however not the first time that Wako has been banned from traveling to the U.S.

In October 2009, the American Government announced a travel ban for Wako saying he had ‘deliberately blocked political reforms’ following the post-poll violence the previous year.

A lawyer by profession, Wako served as the Attorney General of Kenya from May 1991 to August 2011.

Julius Wako likes to keep his personal life private hence information about him is not available. However, this information will be updated as soon as it is available.

Amos Wako’s net worth is estimated to be between Ksh5 million – Ksh10 million. This includes his assets, money and income. His primary source of income is his career as a Attorney General/Politician. Through his various sources of income, Wako has been able to accumulate a good fortune but prefers to lead a modest lifestyle.

Here are some interesting facts and body measurements you should know about Amos Wako. 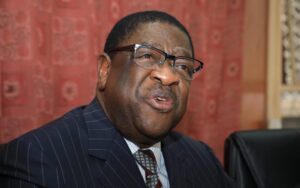 Amos Wako, who boasted a reputable academic, professional and legal career, said he was “dumbfounded” when he was appointed Attorney General on May 13, 1991, a position he held until August 2001 as the 2010 Constitution demanded after serving as Attorney General‘ for 20 years. Amos Wako’s 20-year tenure is the longest of any Attorney-General in Kenya.

He reversed the abolition of the tenure of office for the Attorney General and High Court judges in 1991. Other positive enactments included the Children’s Act Bill 1992 that made it mandatory for all children to access universal primary education.

Taxpayers lost billions of shillings in Wako’s time and he tabled the Anti-Corruption Bill that created the Kenya Anti-Corruption  Commission in 1991 while the  Pharmacies and Poison’s Act 1992  created the National Quality Control Laboratory for free testing of drugs and medical equipment for the public.

The Statute Law (Miscellaneous Amendment Bill) enacted the  Defamation Act that created financial parameters for damages to be awarded in libel cases.

Wako was Attorney General at the height of clamor for political pluralism in Kenya. He was accused of criminalizing dissent in what went down as “judicial tyranny”.

His partisanship was evident when he amended the law governing the nomination of parliamentary, civic, and presidential elections by reducing days for nomination to 21. That in effect meant opposition parties were left with little time to put their houses in order. The law seemed to favor Kanu, the ruling party.

The Preservation of Public Security Act ensured all detention laws remained in force and was effectively used against opposition leaders. even though Section 2(A) that allowed multiparty politics was enacted in his time.

When the United States government banned Senior Counsel Amos Wako from setting foot in the US, the Busia Senator was, “Totally indifferent to the ban, I have no desire to visit the US,” as he said.

That was in November 2009 when Wako was Kenya’s longest-serving Attorney General. He was barred for life from ever setting foot in the land of ‘Uncle Sam’ over his anti-reform record alongside other high-ranking government officials.

Indeed, Wako had no desire to visit the US of A considering the love of his life resides in Kenya; the comely Lady Justice Philomena Mwilu, Supreme Court judge, and Kenya’s Deputy Chief Justice.

The outgoing power couple has been an item for two decades in a relationship that has been under wraps to the majority of Kenyans. But to their closest friends and family, whenever the Lady Justice is around, the bespectacled Wako is never far away, his smile breaking the patterns of his pin-striped suits.

“It’s not like they are hiding their relationship,” a diplomatic attaché in Kenya told The Nairobian, adding that during social functions at the Embassy, it’s a running joke between staffers on how to address their invitation letters either as ‘Hon Wako and Hon Judge Mwilu’ on the same card or to just post the invitations separately.

Amos Wako, a father of two, met and fell in love with Philomena Mwilu, a mother of three, in 1997, the year Kenya held its second multi-party elections.

Wako had been Kenya’s Attorney General for six years at the time. When retired President Moi appointed him to the position on May 13, 1991, he said he was “dumbfounded.”

But Wako was not “dumbfounded” when he laid his eyes on Mwilu who was then working as head of the legal department at Jubilee Insurance Company.

“I remember they met over some issues that were affecting Mwilu at her company. Some millions had been stolen and Mwilu had sought help from the Attorney General to have the culprits brought to book,” recalls a personal friend of the two.

It was love at first sight. The world tilted on its axis. Within months, the two were out of control, not caring two hoots about the affair that got tongues wagging in legal circles.

Amos Wako was then considered married but single, and he needed a partner, while Mwilu had dumped a now very powerful man in Parliament for Wako. “They were perfect partners” offers their personal friend despite Wako’s first wife, Flora Wako, still being around.

Having found love, Amos Wako and Mwilu fully focused on their careers, with Wako leaving the State Law Office for politics as Mwilu climbed to the second most powerful woman in the Judiciary.

A politician from Western Kenya who is Wako’s friend told The Nairobian;

“I drink with Wako regularly. He loves his whiskey, and he doesn’t mind drinking till late, but in more than a decade that I have been drinking with him, I have never seen him with another woman. He is fiercely loyal to Mwilu and has never looked at another woman. I would know if he did anything funny.”

But in July 2011 when Mwilu was a High Court judge a matter came up which led to owning up about her love life.

Lawyer Eric K’Omollo had lodged an application by six women’s groups who wanted Mwilu stopped from hearing their case due to her closeness to the Attorney General in what they argued could be a conflict of interest.

“We have reason to believe that such association or closeness that they have is of a personal nature,” they said, but Justice Mwilu, defending herself said her affair with Wako is “in the public domain, there is nothing to hide. It is okay for it (our closeness) to be discussed in open court.”

At the time, Amos Wako as the Attorney General was a member of the Judicial Service Commission which has been sued jointly with his office.

A three-judge bench dismissed their application which had sought Mwilu’s disqualification from the case on grounds of bias and conflict of interest if she handled the case.

Lady Justice Mwilu is now known as Wako’s de facto second wife, a sharpshooting woman said never to mince words as was evident when she was asked during her interview for the position of Deputy Chief Justice by the Judicial Service Commission regarding her views on polygamy. She said she supported it “as long as there is peace in the family.”

Who is Amos Wako?

Amos Wako is Kenyan politician who was born on 31st July 1946 in Bukhayo, Busia District. He is a former Attorney General and the Senator for Busia county. Mr. Amos Wako left the State Law Office on 26 August 2011 as per the new constitution which demanded him to leave office one year after its promulgation.

How old is Amos Wako?

How tall is Amos Wako?

Wako stands at an average height, he has not shared his height with the public. His height will be listed once we have it from a credible source.

How much is Amos Wako worth?

Amos Wako’s net worth is estimated to be between Ksh5 million – Ksh10 million. This includes his assets, money and income. His primary source of income is his career as a Attorney General/Politician.

Where does Wako live?

Because of security reasons, he has not shared his precise location of residence. We will immediately update this information if we get the location and images of his house.

Is Wako dead or alive?

He is alive and in good health. There have been no reports of him being sick or having any health-related issues.

You may also like to read the Bio, Career, Family, Relationship,  Body measurements, Net worth, Achievements, and more about:

We acknowledge the following websites that we have referenced as we were writing this article.: