Anne is also a motivational speaker, moderator as well as a mentor. Kiguta is very passionate about working with women and girls. She was a part of the Standard Group’s Eve Sister mentorship program where she went around the country mentoring young girls. She is also a child nutrition advocate with Save the Children.

To many the extravagant news anchor and television personality look like a Kamba. Anne maintains a low profile about her personal life and has not revealed any information about her exact tribe. She also believes that all that matters is that we are all one nation. This information will soon be updated.

Kiguta stands at an average height and has moderate weight. She appears to be quite tall in stature if her photos, relative to her surroundings, are anything to go by. However, details regarding her actual height and other body measurements are currently not publicly available. We are keeping tabs and will update this information once it is out.

Anne Nduta who is known for her ability in the news platform for hosting top government officials is a unique personality who to many it may shock that she initially intended to be a social worker. This inspiration came from her mum who ran a ministry that would visit the sick and give them food.

At one point while Anne was young she wished to study law after her secondary school. She attended the St. Christopher’s Prep School before joining the Rusinga High School in Nairobi from 8 years to 13 years. Kiguta later attended Daystar University for her undergraduate degree in Public Relations and Mass Media. She cleared campus in 2008.

Anne Nduta Kiguta was born and raised in Nairobi, Kenya to parents who were devoted to the Christian church and charity. She is the youngest of four daughters. Her mum ran a hospital ministry that would visit the sick and give them food.

Not much is known about her parents nor her siblings. She has not revealed the identity of her parents. This information will be updated as soon as we have credible information.

The television icon and mentor, Anne, has never been officially married. Reports have it that she was once in a relationship with Michael Ngunyi and the two had already gotten engaged. Michael was a marketing and advertising guru.

Rumors have it that Kiguta caught her partner cheating and had to break oof the engagement. Later, Anne revealed that she was in an abusive relationship but chose to stay for a while because of her daughter. Her partner would beat her even in front of their daughter.

At one time, he beat her when she was about to show up live on television. The beating did not stop her from going to work rather she hid the evidence with the help of makeup. When the beating persisted, she decided enough was enough and left without a backward glance.

It was once rumored that Anne was having an affair with Jomo Gecaga. Jomo is President Uhuru’s nephew and personal assistant. The rumors started when the two appeared for a movie screening in 2015 hand in hand.

To top it all, Kiguta, posted a video of Jomo and her daughter having a great bonding session and wished him a great Father’s Day. The video was deleted shortly after posting which brought suspicions on the affair among many fans and entertainment columnists.

People were really confused if the two had broken up or what really happened. It is believed that Jomo Gecaga is the father to her twins, a boy, and a girl. She is the mother of three children. The Kenyan renowned journalist has neither confirmed nor denied the allegations. This information will soon be updated.

The Kenyan-born journalist has gone through many challenges being a single mother but has always found strength in her children and has always worked hard to provide for her kids. Kiguta is a mother of three children; twins and a daughter.

Anne Kiguta Salary and Net Worth

Anne Kiguta’s net worth is estimated to be between Ksh500k – Ksh1 million. This includes her assets, money, and income. Her primary source of income is her career as a Television Personality/Journalist. Through her various sources of income, Kiguta has been able to accumulate a good fortune but prefers to lead a modest lifestyle.

Here are some interesting facts and body measurements you should know about Kiguta. 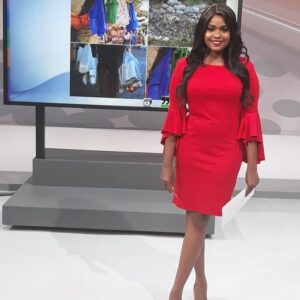 The television siren started her career at the age of 18. She decided to try her luck at a newly started church Radio station and luckily got the job. The accomplished journalist worked in Hope FM from 2003 to 2006.

The task involved carving out a niche audience for a newly founded station in a highly competitive market. She undertook audience research for the station sampling its primary audience and pioneered the establishment of wonderful programs that air to date.

She also interned at Hope FM covering stories about local crime which boosted her journalism skills further. She even began anchoring the news bulletin on the breakfast and mid-morning slot while still dabbling on entertainment hosting additional shows on Fridays and Saturdays.

The former radio host joined capital FM where she was tasked with the responsibility of a senior anchor and news reporter.

In 2009, she joined the standard Media group as a news anchor and reporter. In this role, her duties included

#Checkpoint was such a success promoting Citizen TV to hunt for her.

From 2013, she acted as a group digital manager and senior anchor at Citizen TV. Among her duties were writing screen tests and training freshman news anchors. The sultry news anchor took a sabbatical and made a comeback on K24

As mentioned earlier, Anne Kiguta was raised in a staunch Christian family where charity as part of their life. Today, she continues with this legacy by working with different charities, such as:

How old is Anne Kiguta?

How tall is Anne Kiguta?

Kiguta stands at an average height, she has not shared her height with the public. Her height will be listed once we have it from a credible source.

She has never been officially married. Reports have it that she was once in a relationship with Michael Ngunyi and the two had already gotten engaged. Michael was a marketing and advertising guru.

How much is Anne Kiguta worth?

Anne Kiguta’s net worth is estimated to be between Ksh500k – Ksh1 million. This includes her assets, money, and income. Her primary source of income is her career as a Television Personality/Journalist.

How much does Anne Kiguta make?

The Kenyan journalist maintains a low profile about her fortune. From her daily life, it is clear that Anne earns quite a great fortune from her journalism career. Though she is yet to reveal her exact monthly salary, it is rumored that she receives approximately Ksh. 500k. Her salary is currently under review and will soon be updated.

Where does Anne Kiguta live?

Because of security reasons, she has not shared her precise location of residence. We will immediately update this information if we get the location and images of her house.

Is Anne Kiguta dead or alive?

Anne is alive and in good health. There have been no reports of her being sick or having any health-related issues.

Where is Anne Kiguta Now?

Kiguta is pursuing her career in journalism. She is working as a news reporter at K24 since 2018.

You may also like to read the Bio, Career, Family, Relationship, Body measurements, Net worth, Achievements, and more about:

Her fellow news team at Citizen TV include:

We acknowledge the following websites that we have referenced as we were writing this article.: