This is one of the more smaller antelopes of Kenya. It is a relatively common inhabitant of arid regions with bush or scrub cover. One of the distinctive features of this antelope is its elongated nose, which serves as a very effective cooling device. They are active during both day and night, but seek shade during the hottest period of the day. They have extremely sensitive eyesight and hearing, seeking cover at the slightest sign of danger.

A true desert species of dry arid regions with sparse bush cover and open areas of savannah, the Beisa Oryx is a large, elegant and very distinctive antelope. They feed mainly on grasses, but will browse trees and bushes too. When water is available, they drink daily, but they are capable of surviving for long periods without drinking. They are active throughout the day, but generally seek shade during the midday period. The parallel horns, which are carried by both sexes, are almost straight with a slight backward slant and can grow up to 120 cm in length. When under threat from predators, they will usually flee, but will sometimes present a spirited defense, lowering the head they often inflict serious and sometimes fatal injuries upon their attacker with their spear-like horns.

Waterbucks mainly inhabit woodlands and clearings close to water, where they feed mainly on grasses and herbs. They will occasionally fees on the foliage of trees and bushes, particularly during periods of dry drought. They are dependent on water and will drink every day or so. Mainly active during the early morning, late afternoon and early evening, they are usually found in small groups consisting of a bull with several females and young numbering 5-10 animals in all.

The Wildebeest is an extremely common antelope of open grassland and lightly wooded regions. It is here that is gathers in enormous herds during its annual migration in a continual search for fresh grazing. This circular, seasonal migration from the southern Serengeti to the Masai Mara and back covers a distance in excess of 800 km and at times columns of animals stretch for 40 km. They eat mainly grass and are water dependent drinking twice a day if possible.

The topi is a large antelope of open grasslands and areas of light scattered bush and scrub, where they feed almost entirely on grasses and herbage. They are found in small groups of around 12 animals, usually consisting of a dominant bull along with a harem of females and young. They can, however, congregate in herds of thousands during the dry season when grazing is scarce. They will readily migrate with Hartebeest, Wildebeest, Zebra and other plains ungulates. Although, they drink regularly when water is available, they are able to survive up to a month without water. They are active both by day and night.

The Cokes Harteebest Antelope is one of the most common of Africa’s antelopes, inhabiting areas of grassland and dry savannah, sometimes with lightly scattered trees and bushes. They can be found in herds ranging in number from just a few to many thousands, the larger concentrations occurring during the dry season when available grazing is limited. They are active mainly in the early morning and the late afternoon and evening, seeking shelter from the sun during the hot midday period.

A species of open plains and sparse woodlands within easy reach of water, the Impala will drink twice a day when water is available. They feed mainly on short grasses which forms up to 95 percent of their food intake, only occasionally browsing from trees and bushes. They are normally encountered in small herds of around 6-20 animals, although herds of 50+ are quite common. Their sight is not well developed, but their hearing and smell are acute. When under threat from predators, they are quite fast and capable of leaps of 11m in length and 3m in height.

The Grants Gazelle is a large elegant antelope that is an inhabitant of open plains and dry bush country. They feed on grasses and leaves and do not normally need to drink, obtaining sufficient liquid from their food. This allows them to exploit feeding opportunities in drier regions which water dependent herbivores are unable to inhabit. There is some evidence of seasonal migration in search of grazing. They graze mainly during the early morning and late afternoon, but remain active throughout the day.

Medium small in size, this delicate gazelle is a common antelope of open plains and grasslands, named after the explorer Joseph Thomson who first saw the species in Kenya in 1883. They live in harem herds of one dominant male with, on average, 6-60 females, but during certain periods of the year, usually the dry season, they gather into herds of many thousands, mixing with other ungulates. They feed almost exclusively on grasses, only occasionally browsing from trees and bushes. They will drink daily when water is readily available but can survive for long periods without. They are most active during the early morning and late afternoon and evening.

Living singly, in pairs or small groups consisting of a dominant male with several females and young, the Gerenuk inhabits areas of dry bush and scrub. A large, slender built gazelle, almost unmistakable having an extremely long neck and long delicate legs, they feed exclusively on the foliage of trees and bushes. They often reach higher leaves by standing on their back legs, this action coupled with the elongated neck allows them to browse leaves and shoots that are out of the reach of most other animals, reaching heights in excess of 2m. They do not need to drink, obtaining their entire liquid requirement from their food matter. They are active in the early morning and in the late afternoon and evening, resting in shade if possible during the hot midday period. 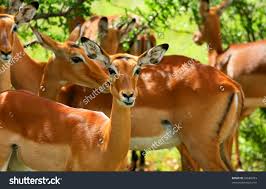