There are over 500,000 Cars in Kenya on the roads. Of these, saloons and station wagons form about 50%. Utility vehicles especially pick-ups form about 20%. Matatus registered annually are slightly more than the buses/coaches. Both form about 5% of the total motor vehicle population in the country. With the liberalization of the economy, used imported motorcars far outnumber the new motor cars registered annually. Most of the imported used motor vehicles are saloon cars.

The Registrar of Motor vehicles registers, issues number plates and Registration books (logbooks) for all the vehicles, trailers, tractors, mobile cranes, motorcycles, and all other types of motor vehicles. In addition, the Registrar keeps records for all the vehicles registered by the department; civilian, G.K., parastatals, city/county councils, and UN bodies as well as embassies.

Registration and licensing of Cars in Kenya

Registration and licensing of motor vehicles and drivers in Kenya are handled by the Registrar of Motor vehicles. This is done in the Road Transport Department which is managed by the Kenya Revenue Authority.

Registration of number plates in Kenya

There are ﬁve types of number plates issued by the Registrar of Motor Vehicles; for civilian, GK,  parastatals, local authorities and diplomats. The civilian number plates have a white oblong plate at the front bumper of the car and yellow oblong or squire plate in the rear bumper depending on the make of the car. The GK plates are similar in design and color as civilian ones only that the numbering is different.

The parastatals have the same design of plates but that both plates are blue in color. Local Authorities have green colour while diplomats have red ones. It is only the civilian and the GK plates that have white front and yellow rear plates. Others have one color for both plates. 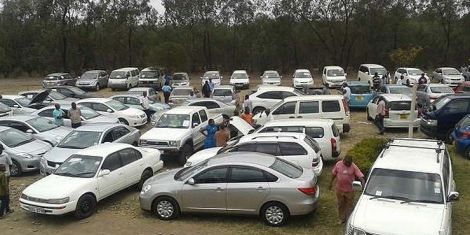 The history of car registration numbers in Kenya

Motor car registration identification numbers have been changing over the years.

During the colonial era, the government administration was on His/Her Majesty’s Service (HMS). Therefore government vehicles registered then bore the following identiﬁcation marks:

This continued until after independence (December 1963) when the registration marks were changed to Government of Kenya (GK).

This series continued until GK 9999 when a new one GK 001A was introduced.

The registration identiﬁcation marking of civilian Cars in Kenya are as follows:

KAB is the registration Mark

159 is the registration Number

They are given red number plates and registration marks are as follows:

99 CD 19 K (first ﬁgures are the code for the diplomats country. CD shows it is for a chartered Diplomat and the next set of ﬁgures is allocated by the embassy, for instance depending on the rank of the car owner in the embassy, then at the end is K which means the embassy is based in Kenya.

They are also given red number plates and registration marks which are as follows:

12 UN 23K (The set of ﬁgures are for the UN department (for example, Population Fund, UN HQs, UNDP, UNICEF, next set with a K are for the rank or code of the car owner).

Car In Kenya registration marks and numbers which are on red number plate appear like this:

32 DX 76B K (The ﬁrst set of figures are the code for the country of the embassy, next set of two letters are for the NGO then followed by a ranking of the car owner and ending with a K.

With its Headquarters in Nairobi, the organization is allocated its own registration Mark and Numbers, for example, UNEP 246K.

These organisations include; ICRAF, ILRAD, Red Cross, ICIPE, PTA Bank, They are issued with red number plates with the following pattern; KX 06 B 68 (The first two letters are a code for these NGOs, and the next two digits and a letter are for a particular NGO, then the next set of figures are the serial number of the car or ranking of the officer who owns it.

♦  Initially, trailers had a registration or serial marking as follows: Z 2837

Government officials with special numbers for their official Cars in Kenya are:

The registration process is handled by the motor vehicle dealer before handing over the vehicle to the customer. A motor car should not be used without number plates and appropriate licenses.

The Registration Book is issued to the car owner later by the Registrar. However, if the motor vehicle is bought on credit, the Registration Book will show joint owners and it will be released to the financier who will retain it until the loan is repaid. The transfer will then be effected to remove joint ownership. The dealer will obtain from the vehicle buyer the necessary information and documents for the motor vehicle registration.

Most used cars in Kenya are imported from Japan and Dubai. There are some vehicles also from Britain, South Africa, and a few other countries. Those imported through Mombasa Port are registered in the Registrar’s Mombasa office after they have been cleared from the entry port.

What you need for Motor vehicle registration in Kenya

For duty-free vehicles, a copy of an exemption letter or documentary evidence of the exemption should be attached, such as a passport, for returning residents. The rest of the usual registration documents except the tax paid receipts should also be availed.  Other motor vehicles registered by the Registrar of Motor Vehicles are: Ex- Army, Ex-Government, Ex-CD or other foreign bodies, and the Police auction Cars in Kenya whose registration number has been tampered with or unknown and the owner cannot be identiﬁed.

Where duty was not paid initially during the previous registration, it must now be paid before the vehicle can be registered for the new owner. This means that the motor vehicle will have to be taken to the Customs and Excise Department for valuation for the payment of this duty. To register a vehicle, you will need to take to the Registrar the registration book, number plates (a pair), duty receipts, copies of your identity card, PIN card, duplicate insurance cover and a completed application Form A.

Parastatal and local government Cars in Kenya are allocated the same serial registration number but with civilian number plate. Parastatals have blue plates while the local government has green. Motor vehicle registration can be changed for very limited reasons. For instance, if a motor vehicle is stolen and is missing for an unreasonably long period, it may have been involved in many crimes and may be unsafe for the owner to continue using it with the same registration number.

If the Registrar accepts your request, the vehicle will be re-registered and you will be issued with new number plates, registration book as well as road licenses after paying the usual fees. The Registrar will require from the applicant a letter from the C.l.D office confirming the need for such change. Registration book is usually posted to the car owner under certiﬁcate of posting using the address given in the application Form “A”.

The vehicle registration book must be surrendered to the Registrar when the vehicle has been written off. The Diplomats must have their forms Pro lB or DAI approved by the officers of the Ministry of Foreign Affairs and International Cooperation. The approved forms will form part of the registration application documents.

Registration of the customs auction vehicles

The payment receipt, letter from the Commissioner of Customs and Excise Department conﬁrming that the applicant was the winning bidder, Vehicle Inspection Report (VIR) for commercial vehicles, photocopies of ID and PIN card, duplicate insurance cover, customs receipt, and application form ‘A’ duly signed.