A Guide To Crocodiles of the Mara

Wildebeest migration into the Masai Mara is the single most popular wildlife spectacle in Kenya. In the river crossings, wildebeest jump into waters full of the dreaded Nile crocodiles and surging currents.

Put in the swift current, eminent stampedes and jaw snapping crocodiles are a guaranteed recipe for mass genocide at the river crossings. The Mara River is awash with a bloated mass of wildebeest carcass that crocodiles feast on for days on end.
Of the over one million wildebeest in the migration, 250,000 die from drowning, stampede, and crocodiles every year.

Very near to the Talek Gate at the Masai Mara, you find the small uniquely situated Crocodile Camp. It is the only camp with access to the open view of the vastness of the Masai Mara savannah with their animal herds.
Here you can watch directly from a safe distance out of your tent the unique wildlife of East Africa, e.g. various species of antelopes, elephants, giraffes, hippos and sometimes lions or cheetahs.
At the time of the Big Migration from July to September, the last large migrant herds of wildebeest and zebra can be observed directly from the camp. 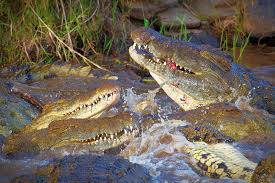 There are two adjacent Talek River Crocodiles near the camp which can be observed from an absolutely safe distance, this is also unique. The camp is equipped with clean restrooms, hot showers, kitchen, and a small Bar / Restaurant.
You bring your own tent or rent one from us or use the fully equipped permanent tents with private shower and bathroom.
In the evening, a bonfire will be lit and we listen to the African animal noises or enjoy a traditional Masai dance.
For the “Safari” in the Masai Mara, we provide an experienced Masai Guide and a four-wheel all-terrain vehicle with an open roof including the driver. Also possible is an exciting Masai walking safari outside the park.
The Crocodile Camp is managed by Anthony Nzioka Nyamai, called Tony. He comes from south-east Kenya and is an experienced safari-chef. He is also responsible for the strategic and economic development and success of the camp.
Living in the Masai Mara since years he gained an excellent relationship to the Masai people, who were employed as watchmen, building specialists or educated safari-guides by Crocodile Camp.