Elephants in Kenya – It is the world’s largest land animal. Kenya has about 30,000 elephants, with an estimated 10,000 in the, Tsavo/Mkomazi ecosystem. One of the best places to see elephants is in the Amboseli Game Reserve. This is the home of late ‘Echo,’ the matriarch one of the herds studied by Cynthia Moss and featured in the book and documentary ‘Echo of the Elephants.
The Kenya Elephant is entirely vegetarian and eats variety of food — grass, leaves, shoots, flowers and bark. Its diet also includes a variety of crops — maize, bananas, mangoes and sweet potatoes — thus bringing it into conflict with man. Interestingly, elephants are partial to over-ripe fruits ostensibly because they make them drunk! They are very social and females stand watch over their dead young and even cover the body with branches and twigs.

Elephants in Kenya: Where to find them…

Elephants, despite their size, can be elusive; amazingly, they can even be mistaken for bushes; while in dense undergrowth eight tons of elephant can appear and disappear in the blink of an eye. One reserve that won’t disappoint you on the elephant front, however, is Amboseli, one of Kenya’s oldest and most-visited.
Home to one of the world’s most famous free-moving elephant populations, Amboseli National Reserve hosts some 1,200 elephants, which have been so extensively tracked, recorded and filmed that they’re almost household names. Nor does it take much effort to find them.
Nine times out of ten you’ll come across a herd or two wallowing in their favourite spot – the Amboseli swamps. The last remnants of a once great lake, which flourished over one million years ago, the Amboseli swamps paint a broad brush-stroke of vivid emerald green across the centre of this otherwise stark park.
Fed by underground streams flowing directly from Mount Kilimanjaro, the swamps are cool, unpolluted and deliciously (for elephants) muddy. They also offer the near-perfect photo opportunity for catching a herd of elephants, muddied up to their middles, dogged by white cattle egret and squelching happily through the papyrus while fetchingly posed against the backdrop of the famous snows of Kilimanjaro.

For those who’d like their elephants concentrated, against a less theatrical backdrop, Mwaluganje Elephant Sanctuary has it all. An elephant migration route as old as time, this reserve boasts 150 elephants wandering in only 24 square kilometres of rugged terrain – that’s a lot of bang for your elephant buck.
The Sanctuary also has a shop where you can purchase your own supply of elephant-dung writing paper.
What’s more, since the Shimba Hills National Reserve is right next door, so you can also drop in to catch its population of 200 elephants as they stroll picturesquely against gently rolling woodlands, which look as though they’ve been geographically misplaced and should be in Northern Europe, while below the hills crash the breakers of Kenya’s celebrated southern coast.

Elephants in Kenya – A Mother’s Love

Elephants are expressive creatures. They display joy, anger, grief, compassion and love. But a mother’s love for her calf is the strongest emotion of all. Mother and child remain in constant touch, the calf never straying more than a trunk’s length from its mother, while she gently steers it by grasping its tail with her trunk.
The mother carries her calf over obstacles, rescues it from mishaps, and uses her own body to protect it from attack: even from the hot sun. She bathes it using her trunk, both to spray water over it and to gently scrub it clean. Protector and nurturer, the mother is also the calf’s teacher. From her it will learn where to find water, what to eat, and how to avoid its only predator — man. It’s a lot to learn for a small elephant, which for the first six years of its life will only taste solid food in its mother’s mouth, and receive sustenance only from her milk.
Elephants have the longest childhoods of any creature on earth other than man and, like us, they stay in family groups until they reach puberty (10-15 years). However while the females may stay with the matriarchal herd for life, the young bulls must leave as soon as they reach puberty. Capable of mating at the age of ten, they will not be socially mature until they have reached the age of thirty, at which time they will have attained the size and the experience to compete against the other bulls for the females when they are on heat.
When it comes to choosing a mate, the female always has the last word. Careful study of elephant behavior in Amboseli National Park has revealed that the female elephant knows exactly what she wants in a male. Those she fancies, she entices by brushing gently up against them, coyly hesitating to one side, or simply striding up and saying hello. Those she doesn’t favour, she simply ignores, tosses her head at — or runs away from. Sound familiar? Well so it should.

Elephants in Kenya – A real buzz for conservation

When he set light to more than 100 tonnes of confiscated ivory in April last year, Kenyan President Uhuru Kenyatta was following a long tradition of headline-grabbing acts that have made Kenya – quite literally – the torchbearer for elephant conservation worldwide.
But while the record-breaking pyre,coupled with China’s recent ban on ivory sales, have presented glimmers of hope in this do-or-die conservation battle, the real frontline – where hungry elephants and poor farmers clash almost daily – has generated surprisingly scant coverage in the world’s media.
So it is heartening for visitors to eastern Kenya to discover a project that offers genuine hope for the rural people who have to live cheek by jowl with these gentle, phenomenally intelligent animals.
In the foothills of Sagalla, a remote farming community bordering on Tsavo East National Park, the Elephants and Bees Project has inspired the widespread use of ‘beehive fences’ to protect small-scale maize and vegetable farms from crop-raiding elephants.
The fences, which are strung between live commiphora (a type of myrrh) posts, have beehives linked by thick wire along every 10 metres of their length. When an elephant tries to pass between the posts, the wire is stretched – causing a buzzing army of bees to leave the occupied hives and head off in pursuit of those who have disturbed their labours.
The result usually involves a lot of trumpeting, stamping, head – shaking – and immediate fleeing.
‘African bees release a pheromone when they sting which triggers the other bees in the colony to sting the elephants in the very same spot,’ explains Elephants and Bees founder, Dr Lucy King. ‘The elephants have learned that one sting can lead to thousands of other bees coming after them, so as soon as they hear that angry disturbed-bee sound, they flee.
They know that, unlike electric fences, which provide a single nasty shock, bees will give chase.’ According to Dr King, there is growing evidence that elephants can retain a ‘negative memory’ of the bee-lined farms – which will make them avoid the same farms in future. ‘We all know the saying that elephants never forget,’ she says, ‘and this is particularly true about bees.’

Elephants in Kenya – Wins on both sides

As Kenya struggles through another drawn-out dry season, it doesn’t take much to realise the ‘win-win’ benefits of the beehive fences: both for farmers, whose annual income can be wiped out in a single night; and for elephants – whose very survival depends on the tolerance of these hard-pressed communities.
There are even more wins for farmers who are prepared to go the extra mile to make their bees pay. This year, Elephants and Bees will bottle and sell hundreds of jars of ‘elephant-friendly honey’ – with 100% of the proceeds going back to the farmers. The project’s staff are also exploring opportunities for beeswax candles and honey-flavoured lip balm.
Since it was launched in Sagalla in 2009, the Elephants and Bees project – a collaboration between Save the Elephants, Oxford University and Disney’s Animal Kingdom – has fenced 28 farms in Tsavo district, where the ‘elephant deterrence rate’ now averages an 80% success rate. And it doesn’t stop there.
Spurred on by its success in Kenya, the project has been spreading the word and funding for new fences – in Mozambique, Botswana, Malawi, South Africa, Uganda, Tanzania, Chad, Congo and Gabon – has begun with field tests now also underway in Thailand, India and Sri Lanka.
‘It’s not a minute too soon for any of these elephant populations,’ says Dr King, who also heads up the Save the Elephants Human-Elephant Co-existence Program. ‘The latest census shows one-in-five elephants have been killed for their tusks in the past decade, and with increasing human populations – and increasingly erratic weather patterns – these incredible animals will become more and more endangered if we can’t help local communities co-exist with them peacefully.’
Three years ago, Save the Elephants opened the Elephants and Bees Research Centre in Sagalla, which has become a hub for the project’s activities – from making beehives and honey, to monitoring elephant movements, moderating local conflicts, and providing training for farmers and community groups.
As well as opening its doors to farmers from other countries, the centre recently began welcoming a few lucky tourists – ecologically-minded visitors who, in exchange for a small donation, can visit the project for a few hours and see firsthand the incredible work it’s doing on this conservation frontline. 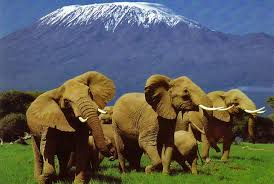