Garissa County is low lying, with altitudes ranging between 70m and 400m above sea level. The area is hot and dry much of the year, receiving scarce rainfall in the range of 150mm – 300mm annually.

Frequent droughts and unreliable rains do not favour agriculture activities and the growth of pasture for livestock rearing. Tana River runs along the western boundary of the county and is the only permanent natural source of water for Garissa town and the surrounding areas. Seasonal Rivers (laggas) provide water during the wet season for both human and livestock, although they greatly interfere with road transportation.

The county also hosts the Boni forest, a section of which is the Boni National Reserve, a protected wildlife conservation area

The dry and arid landscape could be exploited to offer tour packages that encompass camel-back expeditions and camping activities. The region could also be opened up to dessert rallying activities similar to those carried out in different regions in the world.
The tourism sector is also growing with a number of hotels and resorts coming up. These compliments attractions such as the bour-algy Giraffe Sanctuary and other wildlife that contribute to the county’s tourism industry. The county prides itself in having the only ‘long-necked Gerenuk’ East African.

The Garissa Community Giraffe sanctuary (GCGS) is located 3Km south of Garissa Town, bordering the dusty Bour-Algi village. It covers an area of around 125km² and borders the Tana River to the south-west. Its name stems from the large presence of giraffes estimated at more than 1000 living in the outskirts of the Bour-Algi village which are attracted by the abundant acacia trees.

The Boni National Reserve is a national reserve for conservation and lies in the Garissa County, Kenya. The general area lies between 40°83′E and 41°66′E and 1°76′S and 1°25′S and covers an area of 133 KM². The area’s climate is heavily influenced by the North-East and South-West monsoons blowing from the Indian Ocean. There are two wet seasons: April to June and October to December, and two dry seasons: The reserve covers an area of 1,339 km2 (517 sq mi)[1] and is managed by Kenya Wildlife Service. It was gazetted in 1976 as a dry season sanctuary for elephants in the former Kenyan Ijara, and Lamu districts and Somalia.

It represents some of the most varied of ecosystems and provides a refuge for endangered mammals like the elephant, hirola and the wild dog, rare species found nowhere else in the world and hundreds of flora and fauna that are still yet to be described.

The Boni forest, after which the reserve is named, is an indigenous open canopy forest and part of the Northern Zanzibar-Inhambane coastal forest mosaic . Harbouring densities of plant species that are among the highest in the world, the forest has been declared a biodiversity hotspot.

Common herbivores in the region include hippopotamus, bush pig, warthog, buffalo, common duiker, topi and waterbuck. Common carnivores in the reserve are the vulnerable African Wild Dog and the aardwolf. Although extremely rare, African elephants are also present in the reserve.

The Garissa Sanctuary giraffe is hosted by Bour-Algi village, south of Garissa town and was set to host internally displace giraffe that had been affected by the Kenya/Somali border skirmishes. The project is managed by the county government of Garissa. Its name stems from the large presence of giraffes attracted by the abundant acacia trees. The project focuses on the conservation and management of this species that once occurred throughout much of the horn of Africa, but is now, largely confined to Northern Kenya. In so doing the project will:

Further, the project will work to promote capacity building and make management recommendations for the long-term compatibility of wildlife, livestock, and pastoralists in Garissa county.

Results from this project will provide sorely-needed information on the basic ecology and natural history of these giraffes and will form the basis of conservation and monitoring of this range-restricted species in its native range in north-eastern Kenya.

The Arawale National Reserve is a designated conservation area managed by the Garissa County in assistance with the Kenya Wildlife Service. It lies in North Eastern Province of Kenya, 77 km south of the town of Garissa. The reserve covers an area of 53,324 hectares (533 km2; 206 sq mi). To the west, it is bordered by the Tana River and, to the east, by the Garissa-Lamu road. In 1974, the reserve was gazetted as the only in-situ conservation site for the critically endangered Hirola population endemic to north-eastern Kenya and south-west Somalia.

The reserve is a critical refuge for a range of wildlife species including four globally threatened species: Hirola, Gravy Zebra, African Wild Dog, and Cheetah. A study commissioned by Terra Nuova in 2006 also showed signs of the presence of the African Elephant.
The reserve’s main asset is the hirola or Hunter’s hartebeest (‘Beatragus hunteri’), a slender ungulate with lyre-shaped horns which is called the ‘four-eyed antelope’ for its visible preorbital glands. It can only be found in this region and is critically endangered (only the previous step to extinct in the wild) according to the IUCN red list of threatened species. Only 245 specimens were detected during an air survey conducted in 2010, although the actual population may be somewhat larger. Some hirola have been translocated to Tsavo East National Park in an effort to save the species.

Pastoralism is a major economic activity among the communities who inhabit the county. However the tourism sector is also growing with a number of hotels and resorts coming up. This compliments attractions such as the bouralgy Giraffe Sanctuary and other wildlife that contribute to the county’s tourism industry. The county prides itself in having the only ‘long-necked Gerenuk’ East African.

The dry and arid landscape could be exploited to offer tourism packages that encompass camel-back expeditions and camping activities. The region could also be opened up to dessert rallying activities similar to those carried out in different regions in the world.

The Tana River flowing through the region is a great source of water and if exploited could see the region enter an era of modest agricultural production.

The economy of Garissa County

Livestock production is a significant part of the county’s economy. Between 2005 and 2007, Garissa cattle producers earned over 1.8 billion shillings in sales in domestic and overseas markets. In terms of livestock imports, most of Garissa’s cattle come from cross-border trade between Somali livestock merchants.

Livestock is a crucial source of financial capital for the rural poor. The arid and semi-arid lands are home to nearly 70% of the national herd with an estimated value of Kenya shillings 70 billion. The existing Garissa livestock market in Garissa town, Garissa County, covers a total area of approximately 10 acres. It provides a range of employment and income-earning opportunities to the resident of not only Garissa County but the entire northern region.

Banks in Garissa include; Gulf African Bank situated in Al-Wayf Quran House, the Postbank in the Garissa Shopping Centre, and First Community Bank (FCB) in the Bajwed Building. Other banks with branches in the city include Barclays Bank, Equity Bank, Kenya Commercial Bank, National Bank of Kenya, Chase Bank and Cooperative Bank of Kenya.

Oil prospecting company in Garissa County has discovered oil in Garissa county. Vanoil Energy Company from Canada which has been prospecting for oil in Modogashe area of the Garissa has revealed that huge barrels of oil exist. According to company CEO, the deposits will form the largest oil discovery in the country so far. The County now anticipates billions of shillings that could have emanated from oil proceeds.

A 2011 research on the regional cement market estimates that consumption grew by 15 percent to 6.9 million MT across the five countries, with Kenya accounting for over 3.1 million tonnes.

The factory will supply the industry’s expanding export market that experienced an average growth rate of 14.2% for the period 2006 – 2011. This demand can only rise with upcoming investments in road, rail through LAPPSET and emergent industries and cities along the corridor.

Other Mineral deposits found in Garissa county are:

Jobs in Garissa County are awarded in a free, fair and transparency manner in the need to fight corruption in the country.

To access these Garissa county jobs advertisement click the link: Garissa County Jobs for the latest job opportunities in the county.

Garissa county tenders are awarded in a free, fair and transparency manner in the need to fight corruption in the country.

To access tenders in Garissa county click the link: http://garissa.go.ke/resources/tenders/ for the latest tender opportunities in the county.

The current governor of Garissa County is Hon. Nathif Jama Adam and the deputy governor is Hon. Abdullahi Hussein.

Details about Garissa County Wards will be updated soon… 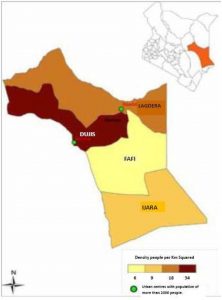