Swahili: Kiboko
In Kenya the hippo is found in greatest numbers in Masai Mara but can also be observed at Amboseli, Nairobi and Tsavo national parks and at Lake Baringo. At Tsavo there is a submarine viewing tank but the hippo are not very cooperative and seem to have deserted the immediate area.
Hippo are too well known to need description except to note that these huge, fat animals with enormous heads and short legs vary between 1350 kg and 2600 kg when fully grown. Their ears, eyes and nostrils are so placed that they remain above water when the animal is submerged.
Hippo generally spend most of the day wallowing in shallow water, coming out to graze only at night. They are entirely herbivorous and feed on a variety of grasses in pastures up to several km away from their aquatic haunts. They are voracious feeders and can consume up to 60 kg of vegetable matter each night. They urinate and defecate in well-defined areas — often in the water in which case they disperse the excreta with their tails.
Hippo are very gregarious animals and live in schools of 15 to 30 individuals though, in certain places, the schools can be much larger. Each school consists about equally of bulls and cows (with their calves) and, like other herd animals, there’s an established hierarchy. Hippos may appear to be placid but they fight frequently among themselves for dominance and this is especially so among the males. The wounds inflicted in such fights are often quite horrific and virtually every hippo you see will bear the scars of such conflicts. They’re not normally dangerous to humans unless cornered or frightened but you should definitely keep your distance. They may look sluggish but they are capable of running at considerable speed.
Hippo breed all year and the period of gestation is around 230 days. The cows give birth to a single calf either in the water or on land and suckle it for a period of four to six months after which it begins to graze on a regular basis. Sexual maturity is reached at about four years old and the life span is about 30 years (longer in captivity).
The only natural predators of hippo are lion and crocodile which prey on the young. Though hippo occasionally foul up fishing nets, they’re considered to be beneficial since their wallowing stirs up the bottom mud and their excreta is a valuable fertiliser which encourages the growth of aquatic organisms. 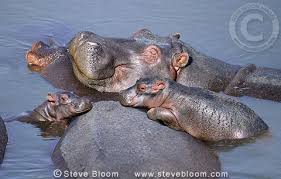