Swahili: fisi
The spotted hyena is a fairly common animal throughout most of Kenya and especially where game is plen tiful. Bearing a distinct resemblance to dogs, it is a large, powerfully built animal with a very sloping kick, broad head and large eyes but with rather weak hindquarters.
The sloping back is what gives the animal its characteristic loping gait when running. Its coat is short, dull grey to buff and entirely patterned with rounded blackish spots except on the throat. Its powerful jaws and teeth enable it to crush and swallow the bones of most animals except the elephant.
Hyena are mainly nocturnal animals but are frequently seen during the day, especially in the vicinity of lion or cheetah kills impatiently waiting for their turn at the carcass along with vultures. Otherwise, the days are spent in long grass, abandoned aardvark holes or in large burrows which they dig out up to a metre below the surface of the soil. It’s a very noisy animal and when camping out in the bush at night you’ll frequently hear its characteristic and spine-chilling howl which rises quickly to a high-pitched scream. This is only one of the sounds which the spotted hyena emits. Another is the well known ‘laugh’, though this is generally only produced when the animal finds food or is mating.
The hyena has highly developed senses of smell, sight and sound, all important in locating food (carrion or prey) and for mutual recognition among pack members and mating pairs.
Hyena are well known as scavengers and can often be seen following hunting lions and hunting dogs, usually at a respectable distance, though they will occasionally force these animals to abandon their kill. On the other hand, although carrion does form an important part of their diet, hyenas are also true predators and are more than capable of bringing down many of the larger herbivores. To do this they often form packs to run down wildebeest, zebra and gazelle, and are able to reach speeds of up to 60 km/h. They also stalk pregnant antelope and, when the female gives birth, snatch and kill the newly born foal and occasionally the mother too. Domestic stock are also preyed on.
In the mating season, hyenas assemble in large numbers especially on moonlit nights. All hell breaks on these occasions and the noise is incredible. The gestation period is about 110 days and litters number up to four though usually less. The young are born in the mother’s burrow. The pups are weaned at around six weeks old and become independent shortly afterwards.
Humans are the hyena’s main enemy, though lions and hunting dogs will occasionally kill or mutilate hyenas if they get too close to a kill. Although they are reputed to be cowardly, you’re advised to keep your distance from them as they do occasionally attack humans sleeping in the open. 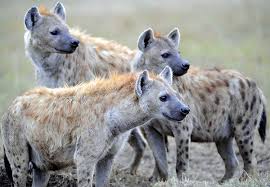