The leopard is perhaps the most graceful and agile of the large cats. A powerfully built animal which uses cunning to catch its prey, it is present in all the major game reserves but is difficult to find as it is nocturnal and spends the day resting on branches of trees, often up to five metres above the ground. It is as agile as a domestic cat in climbing such trees and this is also where it carries its prey so that it’s out of the way of other scavengers which might contest the kill.
The leopard’s coat is usually short and dense with numerous black spots on a yellowish background. The underparts are white and less densely spotted. In addition, the coats of leopards found in open country are generally lighter than those in wooded country.
Leopard are solitary animals except during the mating season when the male and female live together. The gestation period is three months and a litter usually consists of up to three cubs. They prey on a variety of birds, reptiles and mammals including large rodents, rock hyrax, warthog, smaller antelopes and monkeys (especially baboon), and occasionally take domestic animals such as goat, sheep, poultry and dogs. This wide range of prey explains why they are still able to survive even in areas of dense human settlement long after other large predators have disappeared. But their presence is generally unwelcome since they occasionally turn human-eater. It also explains why they are found in very varied habitats ranging from semi-desert to dense forest and as high as the snow line on Mt Kenya and Kilimanjaro. 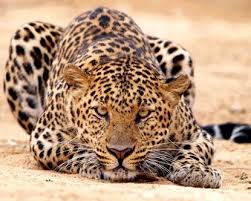