The Kisii tribe inhabit an area in the western highlands east of Lake Victoria. The area is dominated by Nilotic-speaking groups with just this pocket of the Kuria-speaking Gusii. The Kisii Tribe speaking people are the 6th largest community in Kenya, and one of the fastest growing populations in the world. This is mostly rooted in their cultural beliefs of having many children for security in old age.

The name Gusii or Kisii has two possible origins. The more prosaic is that is comes from ‘Gwassi’, which was a place on the shores of Lake Victoria at which the Gusii are believed to have lived as fishermen before fleeing the Nilotes.
The more poetic explanation holds that a man called Mogusii was their founder, from whom the Gusii took their name (Abagusii means ‘the people of Mogusii’). Mogusii lived in the late sixteenth century, and was the great-great-great-grandson of a famous leader called Kintu. Also known as Muntu, Mundu and Wantu, Kintu is credited with having led the first Bantu migration from the semi-mythical place called Misri
The Gusii are relatively small group that were always on the move following influxes of other groups into their existing lands. After migrating to the Mt Elgon area sometime before the 15th century, the Gusii were gradually pushed south by the advancing Luo, and over the next couple of centuries came into conflict with the Maasai and the Kipsigis. They finally settled in the hills here as the high ridges were easier to defend. Having fought hard for their autonomy, the Gusii were unwilling to give it up to the British and suffered heavy losses in conflicts early this century. Following these defeats, the men were conscripted in large numbers into the British army.
The Kisii tribe, together with the Kuria and Luhya, are among the earliest Bantu groups in Kenya, with at least part of their ancestors having arrived in the southwest of Kenya near Lake Victoria (Nyanza) at the beginning of the first millennium AD. Their subsequent history is somewhat confused, as it seems to involve two separate migrations of apparently unconnected people, who eventually merged with the original Bantu-speaking inhabitants of the lakeshore to become the Gusii.
One version has the bulk of the Gusii coming from Uganda. Once in Kenya, they settled in the foothills of Mount Elgon, before moving south some five hundred years ago. The causes of this migration are said to have been either due to drought, or to conflict with the Nilotic-speaking Kipsigis, who are now part of the Kalenjin.
On the way, two generations stayed at Goye Bay on Lake Victoria, after which they headed to the Kano Plains, the disablingly hot, humid flatlands that lie between Kisumu and the western highlands. Here they lived for over a century in scattered homesteads over the plains, and it is was in Kano that the clan structure of the present-day Gusii began to take shape, in the form of four large families headed by warriors who led the migration south, and which became the Bassi, Girango, Sweta and Wanjare clans.
Then, presumably to flee the advance of the Nilotic-speaking Luo tribe, they finally moved to their present location in the Gusii (Kisii) Hills.
The other version suggests that the Gusii came from the south of Lake Victoria, settled for a while in the Kano Plains where they presumably merged with the Gusii that had come from Mount Elgon, and together they then moved into the Gusii Hills.

Gusii is the fond reference to their homeland and Mogusii is culturally identified as their founder and patriarch. Kisii town – known as Bosongo or Getembe by the locals – is located in Nyanza Province to the southwest of Kenya and is home to the Gusii people. The name Bosongo is believed to have originated from Abasongo to mean the Whites or the place where white people settled who lived in the town during the colonial times.

Football (soccer) of national league status is played at Gusii Stadium and other surrounding grounds. Shabana Football Club is based in Kisii town; it has been a popular soccer club in Gusii land and has featured in the Kenya national premier league for many years. Formed by V. Dogo Khan, the proprietor of Shabana Hardware Stores as an incentive to his store employees in the mid-1980s, it grew to be a strong football team which in its successful run, attracted and recruited star players from local high schools and talented individual players living or working in the municipality. However, its team performance has lately be relegated down to national 2nd Division league after losing most of its star players to other local and international teams for economic reasons.

Kisii men have certain traits and abilities that should naturally endear them to all women predisposed to marriage. And good enough, these traits are so ingrained in their DNA, only a few Kisii men tend to veer off the set communal tangent. And this is why,For starters, the most cherished possession of a Kisii man is a house. In Kisii, more than anywhere else in the world, a man’s worth is measured by the house he has built. And the family he raises in it.

The Kisii language (also known as Gusii or Ekegusii) is a Bantu language spoken in the Kisii district in western Kenya, whose headquarters is Kisii town, (between the Kavirondo Gulf of Lake Victoria and the border with Tanzania). It is spoken by the Gusii people. A few Gusii people are bilingual in Luo. Ekegusii is endangered, and there are/swahili-tribe reasons for this. Increasing globalization means that business is now generally conducted in Swahili or English. Ekegusii is also used less frequently at home, at church, and at school. Individuals who still use Ekegusii tend to be the elderly

The Kisii family typically consists of a man, his wives and their married sons, all living together in a single compound. Large families serve two purposes: with high infant mortality rates the survival of the family is assured, and the large numbers facilitate defence of the family enclosure. Initiation ceremonies are performed for both boys and girls, and rituals accompany all important events. Death is considered not to be natural but the work of ‘witchcraft’. The Gusii were primarily cattle keepers but also practised some crop cultivation, and millet beer was often important at big occasions.

Before British colonization, the main crop grown in Gusiiland was finger millet, which the Gusii considered very nourishing (they also believed it strengthened a person’s physical and mental power and increased a man’s sexual prowess). Sorghum, beans, and sweet potatoes were also cultivated. These foods were complemented by meat and milk from livestock as well as wild vegetables.
The staple is now corn, which is ground into flour. Corn flour is mixed into boiling water to form a thick dough like paste (obokima) that is eaten at all meals. A meal usually includes fried cabbage, tomatoes, and some potatoes. Depending on how well-off the family is, chicken or goat may be served. The obokima is formed into a spoon with one’s fingers, and then used to scoop up the meat. Other popular foods are sour milk, goat intestines, and millet porridge. Finger millet was the traditional staple before the introduction of corn. 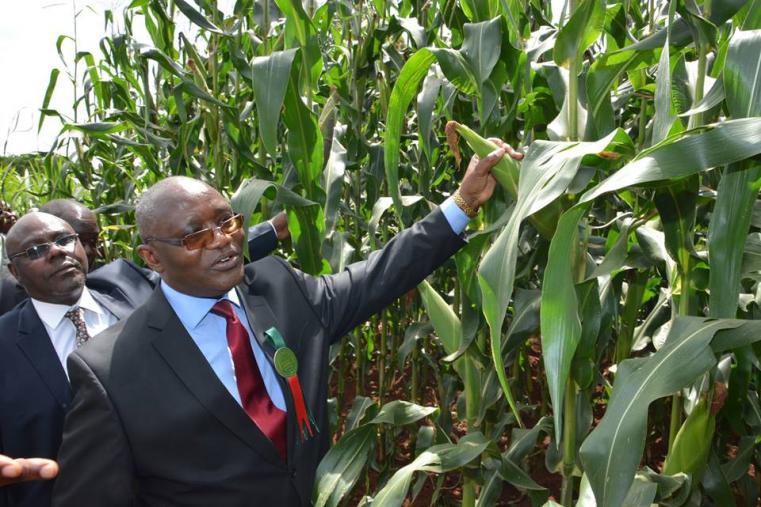 Before Christianity was introduced to the Gusii, they believed in one supreme god who created the world but did not interfere directly in human affairs. Instead, interference was caused by ancestor spirits (ebirecha), witches, and impersonal forces. The Gusii believed that displeased ancestor spirits were responsible for disease, the death of people and livestock, and the destruction of crops.
Today, most Kisii people claim to be followers of some form of Christianity. A Roman Catholic mission was first established in 1911 and a Seventh Day Adventist mission in 1913. There are four major denominations in Gusiiland: Roman Catholic,   Seventh -day Adventist , Swedish Lutheran, and the Pentecostal Assemblies of God.

Although churches are very active, some non-Christian beliefs continue to influence the lives of most Kisii people. If afflicted by misfortune, many Gusii visit a diviner (abaragori) who may point to displeased spirits of the dead and prescribe sacrifice. In addition to abaragori, who are usually women, various healers also exist. Abanyamoriogi (herbalists) use a variety of plant mixtures for medicines. Indigenous surgeons (ababari) set fractures and treat backaches and headaches through trepanation (needles). Professional sorcerers (abanyamosira) protect against witchcraft and retaliate against witches. Omoriori, the witch smeller, finds witchcraft articles hidden in a house. Witches (omorogi) can be men or women, but are usually women. They are believed to dig up recently buried corpses to eat the inner organs and use body parts for magic. Among the Gusii culture, witchcraft is believed to be a learned art handed down from parent to child.

Yes of course. There are about 51% Kenyans living below the poverty line in Kisii county. Therefore, the poverty level of Kisii county population is: 51%. The major economic activities or industries in the county are: Subsistence agriculture, vegetable farming, small-scale trade, dairy farming, tea and coffee growing, commercial businesses and soapstone carvings.
Other economic statistics and information available for Kenya’s Kisii county are listed below:

Alcoholism and violence toward women are the most severe social problems. Traditionally, only older people were allowed to drink large amounts of locally brewed beer (amarua). Today, social control over drinking has broken down, and traditional beer and home-distilled spirits are served in huts all over the district. Probably close to 50 percent of young and middle-aged Kisii men are regular drinkers, with a larger proportion of men than women. This heavy drinking leads to violence, neglect of children, and poverty. The Gusii also have high murder rates compared to the rest of Kenya. Although violence toward women (such as rape and beatings) has been part of Gusii culture since earlier in this century, alcohol is probably a factor in its increase.

The exploitation of women in Gusii society is a serious human rights problem. According to customary law, which is usually followed in the countryside, women cannot inherit or own land, cattle, or other resources. This makes Kisii women completely dependent on men for survival and attainment of any future security.
Until a Kisii woman has adult sons, she is under the authority of her husband and has to ask permission from him to leave the homestead. In addition, the Kisii tribe practice female genital mutilation, which is practiced regularly even though it is prohibited by law. Sometimes called female circumcision, this surgery robs girls of the possibility for sexual satisfaction. The practice is intended to keep girls and women “in line,” and it has attracted the attention of human rights advocates around the world.