Meru County is the home of the Imenti, Tigania and Igembe sub-tribes of the Ameru (Meru) tribe, which is related to other tribes living around the Mount Kenya region: the Kikuyu and the Embu people.  The people of Meru County are now predominantly Christian: Methodist, Presbyterian, Roman Catholic, and other denominations, reflecting the work of missionaries. Meru County is also home to minorities of Indian descent, who are mainly Hindus, and African/Arab descent, who are Muslims. Meru County is also home to some Europeans, predominantly British in ancestry.

There are 61,870 children enrolled in pre-primary schools in the county which constitutes 28,925 male and 32,945 female. This number is enrolled in the 813 ECD centres. The total number of ECD teachers is 1,202 making the teacher child ration to be 1:51. The average number of years of attendance for the pre-school education is two.

The county has 647 public primary schools with a total enrollment of 335,879 pupils and 5,520 teachers. The teacher pupil ratio is 1:60 which is higher than the recommended ratio of 1:40. This number of pupil in primary school is however higher than children aged 6-13 years which stand at 298,025. This may be attributed to many children joining schools when they are older and others joining from neighboring counties.

There are 192 public secondary schools in the county which absorbs students from both public and private primary schools. These schools have a total enrollment of 54,682 students against 1,825 teachers. The proportion of those enrolled in secondary school is however low compared to the population aged 14-17 years as only 45 per cent are in school. The number of male in secondary school stand at 25,625 which is lower than that of girls whose number is 29,057. The low number of boys could be attributed to a combination of factors in the county.

The county is well served with road network with majority of areas been accessible during the dry season. The county has 1,259.9 km of road network of which 225.7 km is bitumen, 266.7 km gravel and 767.5 km of earth surface. However during the rainy seasons, some sections of gravel and earth surface roads are impassable. The major tarmac roads in the county includes: Embu-Meru -Maua; Meru – Nanyuki; Meru – Mikinduri; Meru- Githogo; and Meru-Ruiri -Isiolo roads. The county is served by one airstrip; Gaitu airstrip in Meru Central which has been improved to serve more flights.

The tourism industry is fairly developed in the county. There are a number of National Parks and conservancies that attracts tourists to the region. It’s a tourism hotspot with Meru National park hosting unique wildlife attraction among them the Grevy Zebras, Somali Ostrich, Reticulated Giraffe, giraffe Gazelle and the Onyx. The renowned Lewa Conservancy is also at the heart of the county. The county also offers the Mt Kenya climbing tourism circuit The diverse cultures and heritage among the Meru community are another form of tourist attraction such as conservation of traditional worship places by the ‘Nchuri Ncheke’ elders.

There are a variety of wildlife such as white elephant, baboons, giraffe, gazelle, buffalos, rhino, cheetah, zebras and different birds’ species. These wildlife species are mainly found in the gazetted game parks and forests such as the Meru National Park, Mt. Kenya National Park and Imenti forest.

This park is also referred to as “The Complete Wilderness”. The park has 13 rivers and plentiful mountain-fed streams. It has diverse scenery from woodlands to wide-open plains, undulating landscapes and rich grey alluvial volcanic soils  making it one of the most beautiful parks in Kenya. 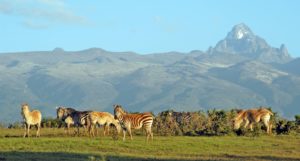 The hotel industry has approximately 2,500 bed occupancy capacity. Tourist class hotels are mostly found within the tourist attraction sites, mainly the Meru National Park. These hotels are privately owned with the county having one three star hotel. Most hotels are classified as bars and restaurants or unclassified.

The county has high agricultural potential which has attracted various commercial banks and other financial institutions. There are sixteen commercial banks, eight micro-finance institutions, four village banks and a number of SACCOs. The strong presence of the various financial institutions indicates that the county has high potential for commercial services. The major commercial banks include Kenya Commercial Bank, National Bank of Kenya, Barclays Bank, Equity Bank, Cooperative Bank and Standard Chartered Bank. The various micro-finance institutions provide credit facilities to the small-scale enterprises. These include Small and Medium Enterprises Program (SMEP), Kenya Women Finance Trust (KWFT), Faulu Kenya among others. The Central Bank of Kenya has a currency centre in Meru town which acts as a banker to the commercial banks operating in the county.

There are several SACCOs whose membership range from farmers to salaried employees such YETU Sacco, Meru farmers Sacco, Meru Teachers Sacco among other which offer credit to its members.

The county has a number of factories which add value to agricultural products. These are mainly owned by the various tea and coffee cooperatives societies. There are also factories processing livestock products such as milk, owned by farmer’s cooperatives. There are other factories in the county producing bread and animal feeds. These are in small scale and mainly found in Meru town.

Agriculture is a major economic activiity in this county due to the volcanic soils in the high altitude areas. Coffee, tea, French-beans and dairy products as primary produce. Wholesale and retail trade also play inportant role in the county’s economy.

There are a number of National Parks and conservancies that attracts tourists to the region. These are served by numerous hotels and lodges. Opportunities hovever exist in further development of this sector. Visitors can also sample the local cultural and traditional being showcased.

Agriculture is the major economic activity in this county due to the rich volcanic soils in the high altitude areas. Coffee, tea, French-beans and dairy products as primary produce. Wholesale and retail trade also play important role in the county’s economy. It’s the Leading County that produces Miraa (Khat) for export and hence boosting the economic national grid.

The major mining activities include production of building stones and ballast in small quantities in areas of Imenti Central and Imenti South. The county’s potential for mining is low given that the area is largely agricultural. Mining potential has not been exploited and a research to explore any mining potential may be conducted to indicate potentials in the county.

Meru County Jobs opportunities for all qualified personnel and those who would wish to work with Meru County government. Jobs in Meru County are posted on the county website.

Jobs in Meru County are awarded in a free, fair and transparency manner in the need to fight corruption in the country.

To access these Meru County jobs advertisement click the link: Meru County Jobs for the latest job opportunities in the county.

Meru County tenders are awarded in a free, fair and transparency manner in the need to fight corruption in the country.

To access tenders in Meru County click the link: www.meru.go.ke for the latest tender opportunities in the county.