The very distinct and instantly identifiable ostrich is the largest living bird. It is widely distributed throughout the savannah plains of Kenya, and so is most widely seen in the southern parks and reserves — Masai Mara, Amboseli and Tsavo.
The adult ostrich stands around 2.5m high and weighs as much as 150 kg. The neck and the legs are bare, and all these areas of bare skin tu
rn bright red in breeding males. The bushy plumage on the males is black, with white feathers in the redundant wings and the tail. The females are a uniform greyish brown and are slightly smaller and lighter than the males. The ostrich’s long and strong legs can push it along at up to 50 km/h.
The Ostrich tends to be territorial and is rarely seen in groups of more than six individuals. It feeds on leaves, flowers and seeds of a variety of
plants. When feeding, the food is gradually accumulated in the top of the neck and then passes down to the stomach in small boluses, and it’s possible to see these masses of food actually moving down the neck.
The ostrich breeds in the dry season, and the males put on quite an impressive courtship display. Having driven off any possible rival males, the male trots up to the female with tail erect, then squats down and rocks from side to side, simultaneously waving each wing in the air alternately. Just for good measure the neck also waves from side to side. The males may couple with more than one female, in which case the eggs of all the females (up to five) are laid on the same nest, and so it may contain as many as 30 eggs. The eggs are incubated by the major female (the one first mated with) by day and by the male at night. The other female birds have nothing further to do with the eggs or offspring. 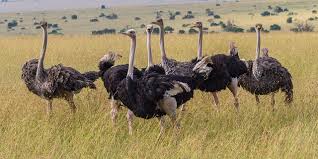