Swahili: Kifaru
One of Africa’s most sought-after species by poachers, the numbers of black rhino in Kenya have fallen dramatically in the past, though they are now once again on the increase, thanks to some determined conservation efforts. They are now thought to number around 500, compared with around 20,000 in 1970!
Rhino are one of the more difficult animals to sight, simply because they’re so few in numbers compared to other wildlife. They are seen in Amboseli quite often, and also in Masai Mara, Tsavo East (rarely), Nairobi National Park and Nakuru. Rhino usually feed in the very early morning or late afternoon; at other times they tend to keep out of sight.
The eyesight of the rhino is extremely poor and it relies more on its keen senses of smell and hearing. Usually when alarmed it will flee from perceived danger, but if it decides to charge it needs to be given a wide berth, though with its poor eyesight chances are it’ll miss its target anyway. Rhinos have been known to charge trains and even the carcasses of dead elephants!
A rhino’s territory depends on the type of country and the availability of food, and so can be as little as a couple of hectares or as much as 50 sq km. The diet consists mainly of leaves, shoots and buds of a large variety of bushes and trees.
Rhino reach sexual maturity by five years but females do not usually become pregnant for the first time until around seven years of age. Calves weigh around 40 kg at birth and by three months of age weigh around 140 kg. Adult animals weigh in at anything from 1000 kg to 1600 kg! They are solitary animals, only coming together for some days during mating. Calves stay with the mother for anything up to three years, although suckling generally stops after the first year. 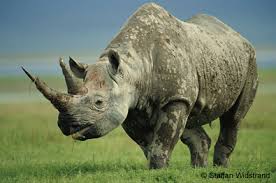