A Guide To Takwa

Takwa ruins are remains of a thriving 15th and 16th century Swahili trading town before being abandoned in the early 17th century. With its scenic and tranquil waters, it is home to two important mosques: Whitewashed Friday and Wa Deule, which has an intricately carved mihrab dating back to 1848.
The Takwa settlement is situated on the south side of Manda Island, in the Lamu District in the coastal province of Kenya. They are the ruins of a town which was abandoned around the 18th century.
The Takwa site can be easily reached from Lamu town. The ruins were first excavated by James Kirkman in 1951. In 1972 the site was cleared again under the supervision of James de Vere Allen, the Curator of the Lamu Museum.
Takwa was never a large place. It was founded around 1500, and probably abandoned around 1700. Kirkman thought that it was perhaps a place where holy men or religious people retreated. The Great Mosque at Takwa is relatively well preserved. The other structure of importance is the Pillar Tomb, which has an inscription with the date of 1681-1682. It is reported that when Takwa was abandoned, its inhabitants settled just across the bay at Shela on Lamu Island. The Pillar tomb of Takwa is high walled unroofed rectangle with a pillar over six metres high and is located at the east end. The tomb is still considered sacred to the people of Shela who visit the tomb twice a year to pray for rain. The Takwa Ruins were designated a Kenyan National Monument in 1982. 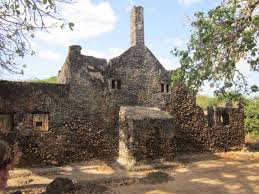 The Great Mosque at Takwa

The mosque is located at the center of the site. Its location reflecting the central place of Islam in the religious and social life of the community. The mosque is characterized by an unusual and striking pillar which rises from the center of its north wall. It is possible that the mosque is located on the site of the tomb of a revered person. The pillar may have been placed on the mosque on commemoration of the burial site. In the north wall or Qibla pointing to the direction of Mecca, is the Mihra, the main focal point of the mosque. The Takwa Mihrab is completely of cut coral construction and its plain lines contrast with the ornate trefoil designs of plasterwork common in the later mosques of the region.
Outside the mosque to the east is a well built conduit and cistern comprising a system for ablutions before prayer. Bordering the exterior of the cistern are the remains of coral foot scrapers used to clean the feet before entering the mosque. A blue and white Portuguese dish of the mid sixteenth century and two earthenware dishes survive on the inside floor of the cistern. From the ablution area, three carged doorways led directly into an eastern anteroom from which access to the main room of the mosque, the Musulla, was gained through another three arched doorway.

How to get to Takwa

The ruins of Takwa are located on the south eastern corner of Manda Island Lamu District in Coast province and is a 30 minute boat ride from Lamu Town.

Watch a Video of Takwa