The small and frisky Thomson’s gazelle is instantly recognisable by the black slash across the side which separates the brown back from the white underbelly. They are very common in the plains country, such as in Amboseli, Masai Mara and Nairobi reserves, but rare in different habitats such as Tsavo West National Park.
Standing around 60 cm at the shoulders, the “Tommy” is one of the smaller antelopes. Horns on the male grow to about 30 cm and almost straight with just gentle curve towards the tips; in the female the horns are straighter and much shorter. Another easy to identify characteristic is the short black tail which seems to be constantly twitching. Along with the oribi, Tommys also do the stiff-legged bouncing jump when alarmed.
Group size varies: one old (largely territorial) male may be accompanied by anything from five to 50 females, or there may be herds of up to 500 young males without territory. When food is plentiful the herds tend to be smaller and more territorial. In times of drought herds of several thousand may gather and roam for food. They are often found in close proximity to other animals, including wildebeest and Grant’s gazelles.
Sexual maturity is reached at around one year but males only mate after establishing their own territory, which occurs sometime after two years of age. Calving occurs throughout the year though tends to peak at the end of the rainy season.
Being a small animal, Tommys have many predators, including the big cats, hunting dogs, hyena and serval. 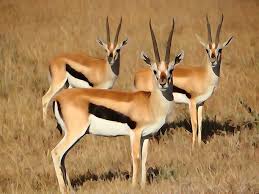